Interesting and free educational stuff I find on the web

Paintings and Illustrations of the Frogs

Frogs are popular subjects in art and painters love them for many reasons. For this reason, we explored the world of oils and watercolors and arrange frog paintings in two basic groups. First is dealing with a frog as an element of the still life composition. Sometimes it’s in an arranged still life, sometimes in a natural environment. 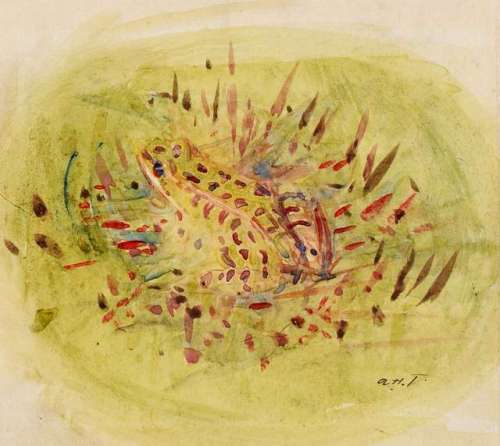 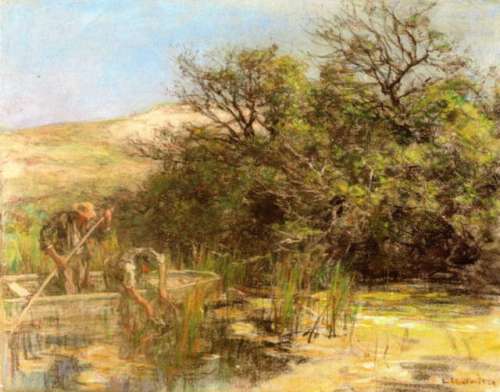 The second part is about stories with frogs in important roles. The fairy tale The Frog King first comes to most minds. There is also a frog as a messenger with good news for the queen in The Sleeping Beauty and we can all probably remember at least a few fables with frogs. In this part, the word painting is not good enough anymore. We are dealing with drawings, woodcuts, gravures, and other media as well, especially if the picture with a frog belongs to one of the numerous book illustrations presented here. 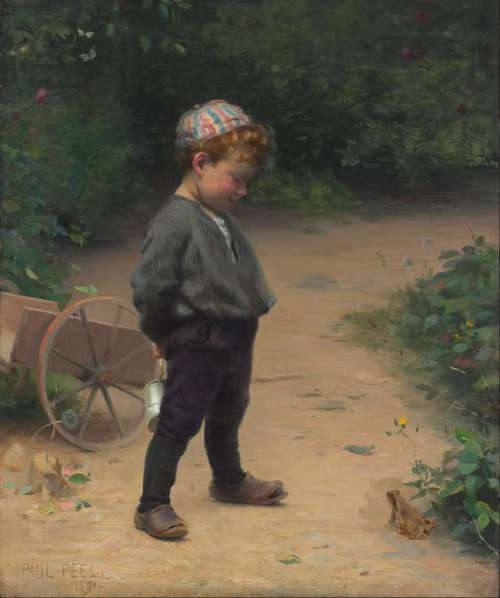 But fairy tales and fables are not the only ones with frogs in an important role – we should mention at least an episode with Leto and Lykans from Greek mythology and the second plague of Egypt from the Bible.

So let’s enjoy the paintings and illustrations of the frogs together!

Believe it or not, still life paintings are not about fruits and flowers only. Artists tried to combine many seemingly unusual elements to achieve desired compositions and frogs were very popular for centuries. We can find them dead and alive, on the tables and on the forest floor, what can be seen below. 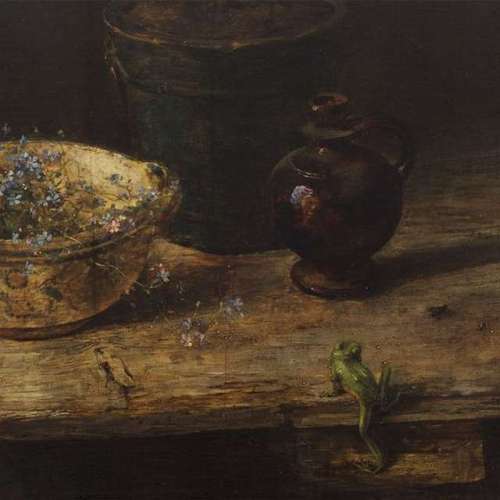 Leto and the Frogs

Leto is one of the less known characters from Greek mythology (she is Latona in Roman mythology). One of the episodes of her life is closely connected with frogs. When she wants to get some water for herself and her newborns, the peasants of Lykia don’t allow her that by stirring the mud at the bottom and making the water dirty. She becomes angry and said they behave like frogs, so they should be frogs. Painters loved the scene!

A full story of Leto is explained right here: 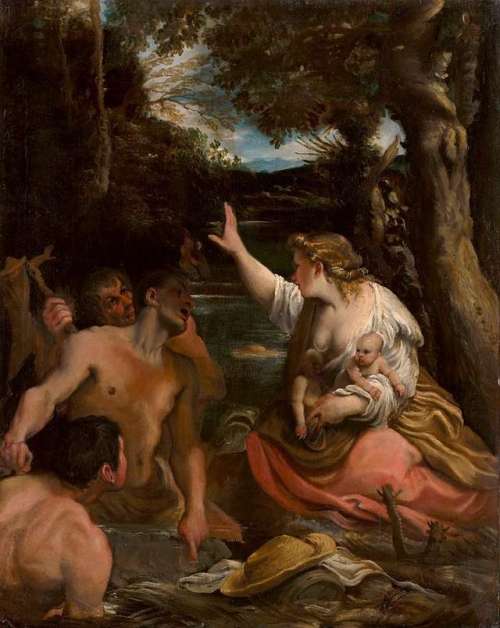 The Second Plague of Egypt

Pharaoh of Egypt promised to let Moses’ people go but didn’t keep his promise. So his country was punished by ten catastrophes. The second one of them was an invasion of frogs. They were everywhere, from waters to bedrooms. Their croaking was unbearable. Here are a few graphic presentations by the artists.

The Plague of Frogs by Gerard Jollain (?-1683), engraving, The Saints Bible, Containing the Old and the New Testament, Enriched with Several Beautiful Figures, 1670 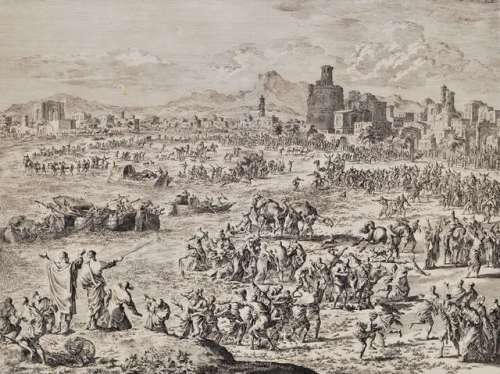 The Second Plague of Egypt – Frogs Will Spread Throughout The Land by Jan Luyken (1649-1712), copper engraving, Rijksmuseum Research Library, 1729 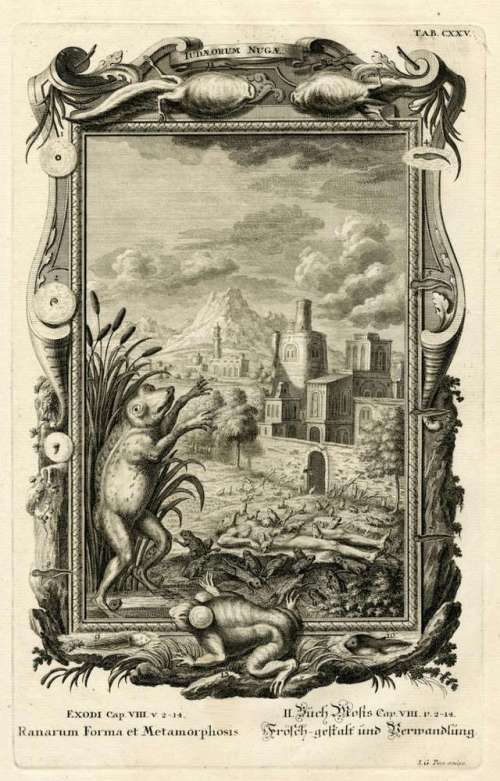 Roles of animals in fables is very predictable. The fox is witty, the wolf if greedy, the rabbit timid, frogs may be much more versatile. In some fables they can be carefree, ambitious or simply mean, what somehow corresponds with their versatility in nature.

The Frogs Asking for a King

Frogs were not happy without some sort of leadership and persisted to get a king until they got one. They were very sorry about that but it was too late. 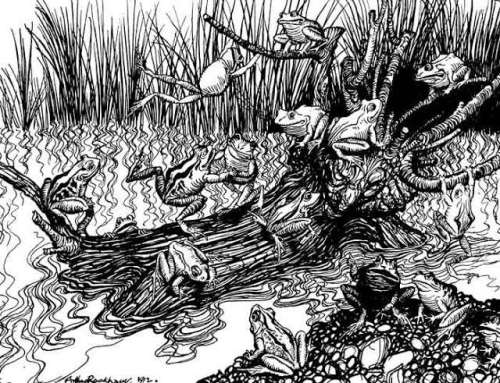 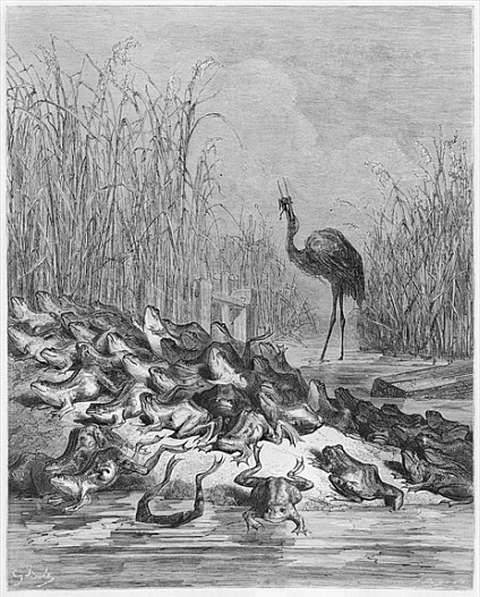 The Frogs Asking for a King by Gustave Dore, Fables of La Fontaine, 1868

The Frogs Desiring A King by Richard Heighway (1832-1917), series of illustration, with decorative capital letter and a moral, The Fables of Aesop, 1922

King Log aka King Stork by Walter Crane (1845-1915), Baby’s Own Aesop, shortened and put into limericks for the younger reader, adaptation, illustration and design, 1887 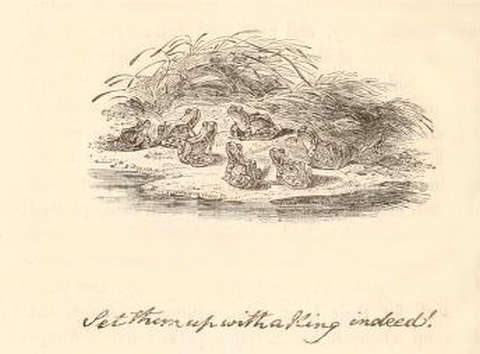 The Ox and the Frog

A frog decided to become as big as an ox and inflated oneself until exploded.

Benjamin Rabier (1864-1939) illustrated this series of illustrations for The Frog Who Would Be as Big as an Ox in La Fontaine’s Fables, published by Librairie illustree, Paris in 1906. 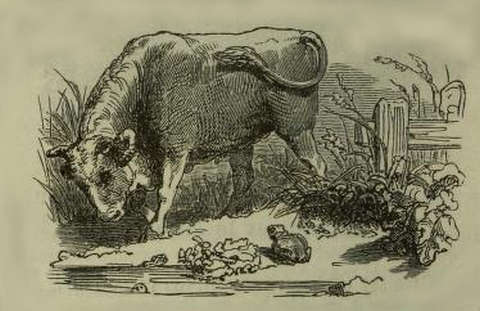 Harrison Weir illustrated The Ox and the Frog for the book Three hundred Aesop’s fables. This book was published by George Routledge and Sons in London and New York in 1867. It might be interesting to note that pictures were engraved by John Greenaway, father of Kate Greenaway. John Greenaway was a woodcutter, who was specialised in animal engravings after Weir’s illustration. 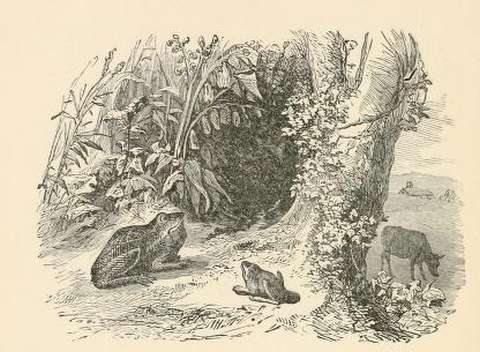 The illustration above is signed by Henry Walker Herrick (1826-1906), American illustrator and was one of many in The fables of Aesop ( with a life of the author), published by Hurd and Houghton, New York in 1869. 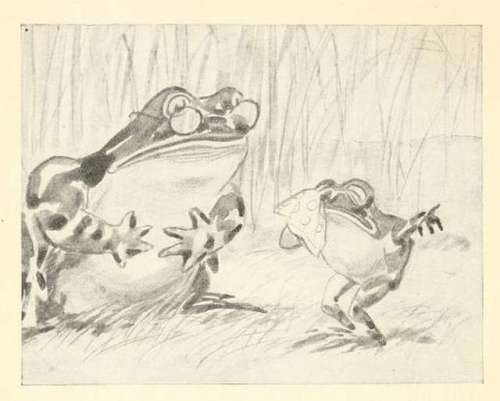 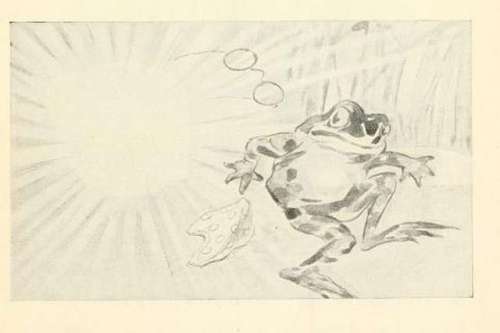 They were published in The Herford Aesop: fifty fables in verse by Ginn and Co., Boston, in 1921.

-The Hares and the Frogs

Hares had enough of being afraid of everything, so decided to drown themselves. By the way, they scared a few frogs. Noticing at least somebody is even more afraid than them, they immediately felt better.

-The Frog and the Rat

The frog coined a plan to trick the rat but the plan didn’t pan out particularly well. The hawk spotted and ate them. Both.

-The Two Frogs and the Well

Two frogs were looking for some water when they found a well. One promptly tried to jump in, but the other stopped him by asking: How will they come out?

A frog (a toad) informed other animals he is a doctor who can cure all the diseases. His career was short-lived. a fox asked him how kind of doctor is he if he can’t cure his own wrinkles.

This famous fairy tale about growing up, taking responsibilities, and getting ready for life-changing transformations is among the most popular in the world for centuries. There are only a few illustrations from the story. 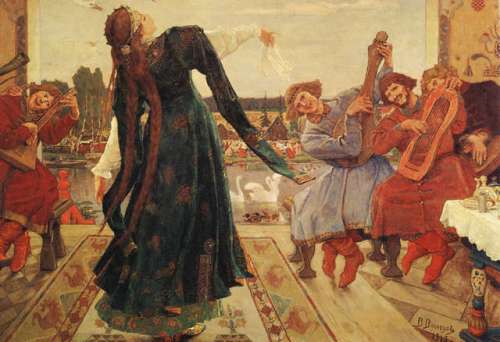 While this picture presents the princess after the transformation, we can see her how she looked before in next one:

There is no frog in older editions of this famous fairy tale, but brothers Grimm added it in the beginning, as a symbol of fertility who informs the queen about the baby she is yearning for so long time. 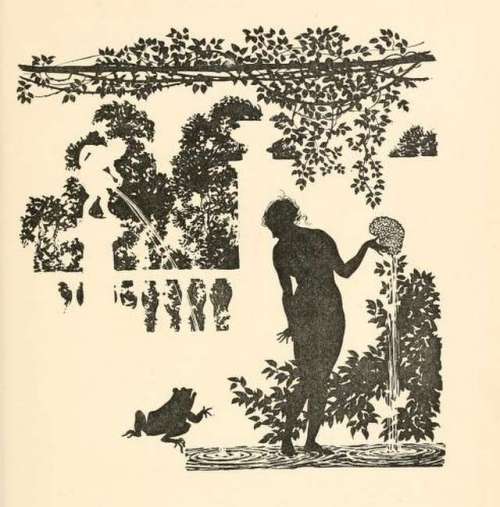 The Sleeping Beauty by Arthur Rackham, 1920

There’s also a nursery rhyme A Frog He Would A-wooing Go, so masterfully illustrated by Randolph Caldecott. 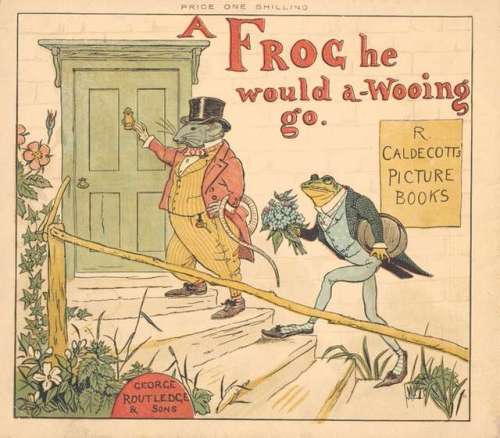 All illustrations from this classic collectible picture book with additional info are available here:

http://goodstuffonly.joomla.com/8-picture-book/4-a-frog-he-would-a-wooing-go
We’ll add even more graphic material about frogs in the future, so stay tuned. Please, share this knowledge with your friends!